I have rather vivid and fond memories of every Chinese New Year I celebrated with my family growing up in the Free State. The whole family would gather and we’d either eat at a family member’s home or out at a Taiwanese restaurant and receive red envelopes with money inside from the grownups. We’d eat till our seams were bursting and there’d still be left overs for the next two days.

Being in Cape Town, I haven’t celebrated Chinese New Year with the rest of my family in a while, but making sure I celebrate it when it occurs is very important to me. For this occasion, my sister and I decided to cook and invite our friends over to celebrate. According to the Chinese horoscope, 2012 is the year of the dragon. This year is a special year for me as I was born in 1988, two cycles have passed and once again, it’s the year of my birth year.

On the food side, I contacted some of my fellow foodies and friends and some food bloggers were been keen to get involved to participate in the Chinese New Year’s celebration. Check out what Cape Town’s food bloggers have made for this special day!

For Chinese New Years, my sister and I cooked up a spread for our friends. The highlight dish is the recipe I’ll be sharing with you today – Pekin Duck. The duck I bought for our dish is a freerange Pekin duck from the Neighbougood’s butcher at The Old Biscuit Mill. The duck was 2,3kg and fresh as a daisy. Roasting the duck takes quite a bit of time, but after 2 hours and 20 minutes, there’s nothing to compare the joy of seeing such a gorgeous golden-brown glow on the skin. Read more on Peking Duck here. By Food and the Fabulous – Ishay Govender-Ympa

My lovely friend Ming of Butterfingers blog invited us to participate in cooking something for Chinese New Year, which falls on 23 January 2012. It’s the year of the Dragon, not only an auspicious year, but the very year she was born in. What a fantastic omen!

Now, with the knowledge that I had a manic week before departing to Amsterdam in the ridiculously early hours of Saturday morning, Ming not only gathered the ingredients for this dish, she came to visit me and we cooked it together. It is really easy to make, as you can tell from the brevity of the ingredient list. The flavours of sour, sweet, salty work so well. Mint adds a fresh burst at the end. This dish is best served cold, and Ming recommends it as an appetizer.

Phoenix and Dragon plus Egg Tarts

By Wine on the Blog – Werner Els

So to celebrate Chinese New Year, I have decided to make some Asian inspired dishes. I made Phoenix and Dragon stir fry which is a simple combination of chicken and prawns marinated in cornstarch, soy sauce and sherry stir fried with red and yellow peppers served on a bed of noodles (which symbolises long life).

Even though it is the Year of the Dragon, the Phoenix also plays an important role in Chinese Mythology. The Phoenix is often depicted with the Dragon at weddings ceremonies and symbolises blissful relations between husband and wife…

About 9 years ago during the time of Chinese New Year, I arrived in Taiwan with stars in my eyes and my life reduced to 20kg in my backpack. I was taken by the principal of the Kindergarten I was going to work for, to a rural village called Pushin. The place was a virtual ghost town because it was slap bang in the middle of Chinese New Year and most of the businesses were closed for the whole week.

I probably would have died of hunger, was it not for my principal who took me to a dumpling shop in my neighbourhood and introduced me to Shuǐjiǎo (水餃). It is a delicious dumpling with exactly the same ingredients as fried dumplings. These are boiled to perfection and then served with a divine dipping sauce that strikes the perfect balance between salty, sour and spicy.

This year I’m spending Chinese New Year with my “adopted” family, high up in the mountains of Yilan, on the east coast of Taiwan, and these dumplings will definitely feature on the menu of our family feast.  “Gōng xǐ fā cái!” 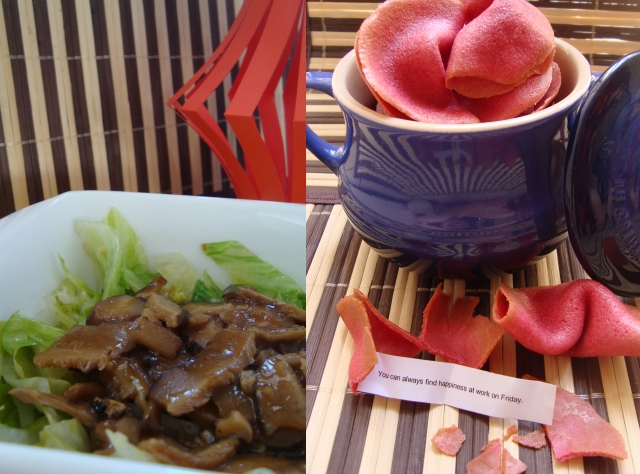 By The Squashed Tomato – Linda Harding

When Ming of Butterfingers invited me to take part in her round-up of what South African bloggers make for Chinese New Year (23 January 2012), I was a little nervous. I love Chinese cuisine, don’t get me wrong, but the closest I’ve got to actually making it is a higgledy-piggledy stir-fry with sweet and sour sauce. After learning more about Chinese New Year cuisine and the unique symbolism of each dish, and finding out that 2012 is the year of the dragon, I just had to take part. The year of the dragon is about good luck, fortune and the colour red (for more of the history, culture and tradition of Chinese New Year, please visit Ming’s blog on 23 January). This year I will be celebrating the first birthday of my own business, so a mixture of good luck and fortune for year two wouldn’t go unappreciated! I therefore decided to create two dishes (doubling my chances!) for my humble celebration of the most important festivity on the Chinese calendar: Coins and Greens to start, and homemade “Year of the Dragon” Red Fortune Cookies (complete with fortunes) to finish, with red paper Chinese lanterns and gold place-mat covers for decoration.

I am passionate, decisive, artistic, generous, loyal, magnanimous (ooh, I like that word), proud, eccentric, intellectual and fiery. I am also tactless, brash, dogmatic, demanding, intolerant and imperious (another pretty word). These according to my Chinese zodiac. And they’re pretty darn true.

2012 is the year of the dragon. It’s my year. And Chinese New Year (now) is when it starts. If you follow me on Twitter, you should know my obsession with Asia(ns). I love their culture.

Kung Pao chicken (宫保鸡丁) is named after Ding Baozhen and it’s quite a controversial dish. It was politically incorrect during the Cultural Revolution and renamed because of its association with this Baozhen guy.

T and I will be celebrating New Year all week. Since we love Chinese food, this makes us very excited. The first dish we made was kung pao chicken. Since I am a chilli pansy, I made mine without the chillies, and just added them for T’s dish.

By Add to Taste – Hila Jonker

When I looked through the recipes in the links Ming had sent us I was delighted to see that Custard Tarts were among the list of desserts. I had first heard about these little treats in Ching-He Huang’s “China Modern” cook book. I adapted her recipe slightly and used phyllo pastry instead of sweet pastry the first time I made them and it worked so well I have made them that way since. With your basic custard ingredients and 4 easy steps, creamy deliciousness is yours in less than 40 minutes.

Thank you to all the foodies who contributed to this post, you all have made this year very special.